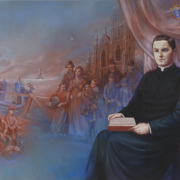 Today, October 31, Father Michael J. McGivney, founder of the Knights of Columbus, was declared “Blessed,” the final step before being canonized as a Saint in the Roman Catholic Church. Joseph Cardinal Tobin, Archbishop of Newark, celebrated the mass at the Cathedral of Saint Joseph in Hartford, Connecticut, representing Pope Francis. In the apostolic letter of beatification, Pope Francis praised Blessed McGivney as “an outstanding witness of Christian solidarity and fraternal assistance” because of his “zeal” for proclaiming the Gospel and his “generous concern for his brothers and sisters.”

The miracle recognized as coming through Father McGivney’s intercession involved an unborn child in the United States who in 2015 was healed in utero of a life-threatening condition after prayers by his family to Father McGivney. Michael “Mikey” McGivney Schachle, was present at the Mass with his parents, where they presented the relic of Blessed McGivney to Cardinal Tobin.

Born of Irish immigrant parents in 1852 in Waterbury, Connecticut, Blessed McGivney was a central figure in the dramatic growth of the Church in the United States in the late 19th century. Ordained in Baltimore in 1877, he ministered to a heavily Irish-American and immigrant community in the then-Diocese of Hartford. At a time of anti-Catholic sentiment, he worked tirelessly to keep his flock close to the faith in part by finding practical solutions to their many problems – spiritual and temporal alike. With a group of the leading Catholic men of New Haven, he founded the Knights of Columbus in 1882 at St. Mary’s Church to provide spiritual support for Catholic men and financial resources for families that had suffered the loss of their breadwinner.

Father McGivney spent his entire priesthood in parish ministry and died of pneumonia on August 14, 1890— two days after his 38th birthday – after falling ill amid a pandemic. Recent scientific evidence indicates that that pandemic – like the current one – may have been caused by a coronavirus.

Known by his contemporaries for his devotion to the faith and his embodiment of the characteristics of the “Good Samaritan,” his cause for sainthood was opened in the Archdiocese of Hartford in 1997. St. John Paul II – who was pope at that time – lauded Father McGivney’s principles, stating in 2003, “In fidelity to the vision of Father McGivney, may you continue to seek new ways of being a leaven of the Gospel in the world and a spiritual force for the renewal of the Church in holiness, unity and truth.”

In March 2008, he was declared a Venerable Servant of God by Pope Benedict XVI, who during his visit to St. Patrick’s Cathedral cited the “remarkable accomplishment of that exemplary American priest, the Blessed Michael McGivney, whose vision and zeal led to the establishment of the Knights of Columbus.”

God, our Father, protector of the poor and defender of the widow and orphan, you called your priest, Blessed Michael McGivney, to be an apostle of Christian family life and to lead the young to the generous service of their neighbor. Through the example of his life and virtue, may we follow your Son, Jesus Christ, more closely, fulfilling his commandment of charity and building up his Body which is the Church. Let the inspiration of your servant prompt us to greater confidence in your love so that we may continue his work of caring for the needy and the outcast. We humbly ask that you glorify Blessed Michael McGivney on earth according to the design of your holy will. Through his intercession, grant the favor I know present. Through Christ our Lord, Amen.