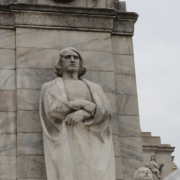 The ongoing debate in communities throughout our country about the celebration of Columbus Day often centers on efforts to recognize the important contribution of Native Americans to the United States and the terrible way in which these peoples were treated by early settlers.  Instead of pushing aside the contributions of Columbus and the importance he holds in immigrant, Catholic, and Italian-American communities, efforts should be made to find another day or a separate, standalone opportunity to honor indigenous peoples.
We have just received word that the District of Columbia City Council has fast-tracked legislation to change Columbus Day to “Indigenous Peoples’ Day” in the District.  The Council will consider this bill at its meeting tomorrow, October 8, at 10:00 a.m. at the John A. Wilson Building (1350 Pennsylvania Avenue, NW).
I would ask every Knight and their family living in the District of Columbia to contact both their City Councillor and the at-large Councillors to voice your opposition to this bill TODAY.
Contact your Councillors
Thank you for your service as Knights and for taking the time to ensure your voice is heard on this important issue in DC.
If you or anyone you know is curious as to the truth behind Columbus and his legacy, we would encourage you to visit www.truthaboutcolumbus.com and to read this article by Patrick Mason, a member of the Osage Mason. The Supreme Council also has a webpage “Honoring our Namesake” with additional resources and articles.
https://dcknights.org/wp-content/uploads/2019/10/10796540832_IMG_2777sm2.jpg 645 1492 Alex Cranstoun https://dcknights.org/wp-content/uploads/2020/08/dc-state-council-new-01-1.png Alex Cranstoun2019-10-07 12:39:452019-10-07 12:40:19Save Columbus Day in DC