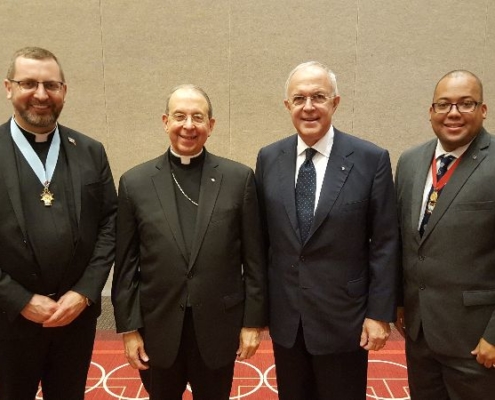 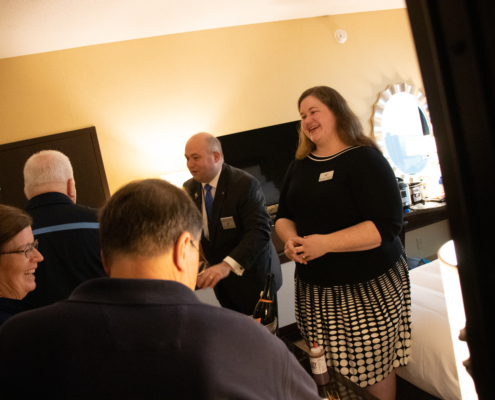 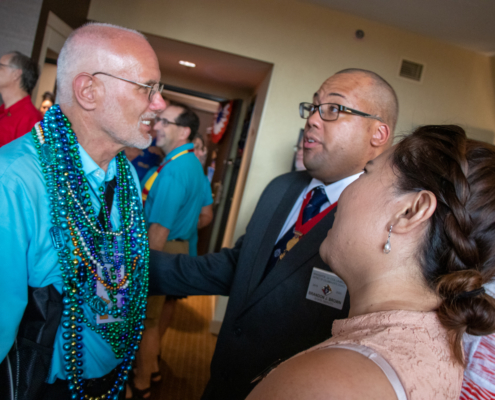 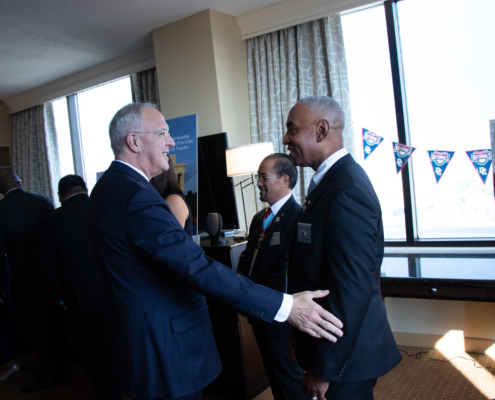 The Supreme Convention a chance for us to see the breadth and richness of the Order. This year’s 137th convention was no exception! Over five full days, the DC delegation was able to welcome Knights from around the world to our hospitality suite where we served up DC staples of Ben’s Chili Bowl half-smokes and mumbo sauce along with delicious Bellinis – an omage to DC’s embedded brunch culture. Hundreds of Knights and their families streamed through our “Open House” meeting the delegation and of course exchanged many state pins. We were even honored to have both the Supreme Knight and Deputy Supreme Knight – both Past State Deputies of DC – join us for some time in the room and greet many attendees.

The beautiful opening Mass of the convention, on the Feast of the Transfiguration, brought in many bishops and priests from around the world, and was poingantly celebrated by His Excellency Archbishop Bernard Hebda, the Archbishop of St. Paul-Minneapolis. He had this to say in his homily:

“I am so grateful for the Knights of Columbus, and for the encouragement that you consistently offer to one another to make the climb with Christ. It’s significant for me that the Lord took Peter, James and John up the mountain together. The climb might have been too much for any of them individually but together they were able to make it to the summit. I love how the men of the Order challenge one another to spend time with Christ, how you hold each other accountable for making the commitment to growth in the spiritual life, how you remind one another that it’s possible to lead a life of virtue as long as we are journeying with the Lord and responding to this invitation.”

During the business session on Tuesday, during the Supreme Knight’s annual report, we honored the life of Kendrick Castillo – who sacrificed his life in defense of his fellow classmates. Kendrick had every intention of becoming a Knight of Columbus, just like his father, he even had his first degree marked on his calendar. So, in an unprecedented move, the Supreme Knight moved to the delegates on the floor that we grant Kendrick full posthumous membership in the Knights of Columbus. This motion was met with a thunderous standing ovation from everyone in the room. It was truly an honor to be present and vote in favor and to honor him.

Later that evening, we came together again for the traditional States’ Dinner where all in attendance waved flags from their home jurisdictions and we all took part in singing the songs of each of the States. It was truly a memorable evening where we heard moving words from Kendrick Castillo’s parents and Cardinal Collins of Canada.

As the convention winded down into its last business session, we had the opportunity to say thank you to the Minnesota jurisdiction for hosting the convention and the Supreme Knight announced that we – the District of Columbia – would have the honor of hosting the 138th Supreme Convention in 2020. State Deputy Brandon Brown invited all in attendance to join us next year and we played a short teaser video which was put together by Alex Cranstoun, our State PR Director. It was truly a memorable moment, as it was the first time a video had ever been used to tease the next convention – just another way DC is leading the Order in innovation. In 2010, the last time DC hosted the convention, we were the first convention to use online registration. And this year, we are ready to show the Order what it means to be at the forefront of innovation yet again!

Our thanks to State Warden Jazz Armstrong who helped to staff our hospitality room and to the Maryland State Council who assisted in helping us drive some of our supplies out to Minnesota!

Chris Pierno is the State Secretary of the District of Columbia State Council.